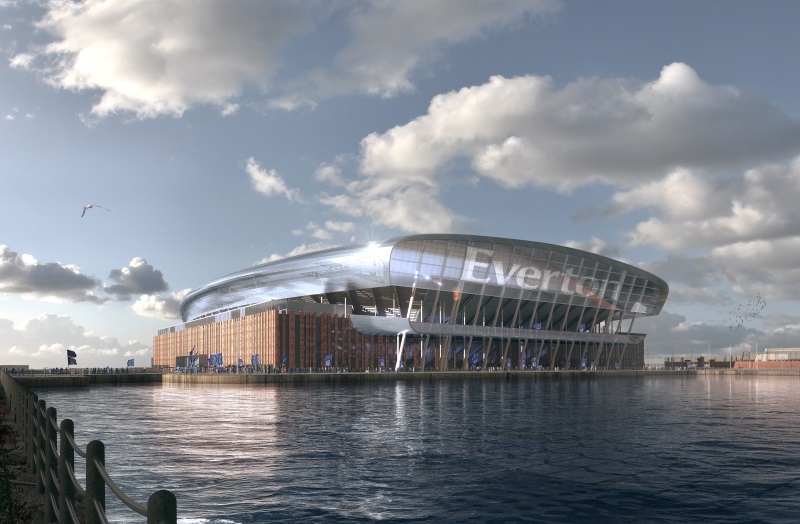 BUSINESS leaders from all sectors across Liverpool City Region have pledged their support for Everton’s proposals for an iconic new stadium on the River Mersey and the Club’s plans for a community-led legacy at its current home at Goodison Park.

The city faces a transformational once-in-a-generation chance to deliver new opportunities and new jobs with the creation of a new stadium at Bramley-Moore Dock and provide a further boost to north Liverpool with a large-scale community-regeneration project in Liverpool 4.

Leaders from multiple organisations, which together represent many of the city and the region’s businesses and largest institutions, have signed a ‘dock-style’ wall in support of the The People’s Project – a new stadium at Bramley-Moore Dock and a community-led legacy at Goodison Park.

A second public consultation is currently underway with residents across Liverpool City Region invited to visit a roadshow which is visiting all six Merseyside boroughs to allow the public to view the plans, experience an inside-and-out VR tour of the proposed stadium and to feedback their thoughts via a questionnaire.

For residents not living in the region or unable to make the travelling consultation, all the materials are available online including a downloadable app offering participants a 360-degree view of the interior and exterior of the stadium.

Bill Addy, chief executive of the Liverpool BID company, which represents the interests of more than 1500 businesses in Liverpool city centre, is one of the signatories. He said: “At the stakeholder event that marked the start of the consultation – there was genuine excitement and a mixture of tears of joy and goose bumps. It’s not very often you have everyone in a room looking at a vision with one single mind – ‘let’s get it delivered’.

“This is a transformational opportunity for the city particularly in the north and it will be the catalyst for its redevelopment, the city’s expansion, which creates jobs and will bring the Mayor of Liverpool’s inclusive growth programme into play in the north. The People’s Project fuels that drive not just for Bramley-Moore but also for the Goodison legacy.

“If this doesn’t happen, the city will continue to move forward, but at a far slower pace and such benefits wouldn’t be felt in this generation. Everton, as a Club, might stagnate and the benefits and the impact wouldn’t be delivered in the north of the city.

“I think that what Everton is delivering here in terms of consultation shows how serious the Club is in engaging with the people. The Club is showing that it wants to listen to everybody. In the 40 years I have been working in Liverpool I have not seen a consultation as thorough and engaged as this one. It really is exemplar.”

Steve Coffey, group chief executive of Torus, the biggest landlord in the North West with 16,000 homes in Liverpool, said: “I don’t see a better opportunity to be a catalyst for the transformation of north Liverpool.  This project also fits in with rebalancing the city’s economy, with the jobs that come through in construction and the jobs that will come through in the site afterwards.

“It is a real flagship and a massive regeneration opportunity, but it’s also a catalyst both economically and physically to transform the city and the offer in the city economically – office space, quality housing, night time economy, a whole transformation that will come with the stadium project.

“Also the legacy project at Goodison is an opportunity as the club moves out to transform that area, create community use and housing solutions and really make sure that there’s a real tangible legacy for the long-term at the Goodison Park site.”

Everton is on track to submit a planning application later this year for a stadium at Bramley-Moore Dock which forms part of Peel L & P’s Liverpool Waters site. At the same time, the Club will submit an outline planning application for the redevelopment of Goodison Park to create new community assets after relocation, building on the life-changing and life-saving work of its charity, Everton in the Community.

Two recent reports have also shown that massive economic and social value will be generated by The People’s Project if the Club receives the go-ahead to proceed. An evaluation by socio-economic specialist consultants, RealWorth, estimates that the three elements of The People’s Project between 2024 and 2033 will be worth £793.4m to society, compared to £556m generated solely through Everton in the Community activity, a difference of more than £237m.

Research carried out by international property consultancy CBRE indicates The People’s Project would deliver a £1bn boost to the city’s economy and the potential for up to 15,000 new jobs and £34m of local income to local families.

Iain Finlayson, Business Performance Director, Liverpool ONE, said: “Since Liverpool ONE opened this is Liverpool’s biggest opportunity to take huge strides forward. It’s going to inject huge amounts into the economy; it’s going to be brilliant for local employment; it’s going to give a great sense of development down at that end of the city which is going to grow into the city centre.

“We’ll even see people coming into the city centre before and after games once that stadium is open, which perhaps we haven’t seen before. So it’s going to be a full city centre experience for people on matchdays.”

It is also estimated that an additional 1.4 million visitors would be attracted to the city and Bill Addy, who is also chair of the Liverpool Visitor Economy Board, added: “We know that Liverpool’s tourism has two key levers – football and The Beatles and this reinforces the first one doubly so by adding an iconic stadium on the waterfront.

“Those docks have been abandoned for years and have lacked investment. The city will benefit from the impact it will have on the river and the amount of tourists that will come down the Mersey through the cruise terminal, coupled with the expected uplift in the visitor economy that this whole project will bring through the stadium and the Liverpool 4 projects, regardless of whether you are a football fan or not.”

John Hall, chief executive of Pro-Liverpool – which promotes professional excellence in Liverpool and the City Region, said: “I think it’s brilliant. This is an area of Liverpool – particularly when coming in from Southport – that really does need developing.

“This will help connect the Titanic Hotel, which is just outside the centre, to the rest of the city. Additionally, it will sit well with Liverpool City Council’s Ten Streets project.

“We all know Everton in the Community’s done great work over the years, and to me this is a continuation of that.”

Frank McKenna, chief executive of leading networking organisation Downtown in Business, said: “I think the new stadium is an opportunity not just for Everton Football Club but for the city generally. It will regenerate a part of the city that has for a long time been derelict and has been in much need of improvement.

“Liverpool, since being European Capital of Culture 2008, has seen a real boost to its economic growth. The fact of the matter is that many of the peripheral communities, including north Liverpool, have been left behind. So what The People’s Project can be is a catalyst to create jobs and business opportunities – not simply around the stadium, but other projects that are going to happen as result such as hotels, residential and commercial developments and Grade A office space.

“This is a great news story for the city and for north Liverpool in particular.”

Colin Chong, Everton FC’s stadium development director, said: “The support of all aspects of Liverpool life and from both the public and from key stakeholders across the region is vital in the success of The People’s Project.

“This is not only about football and buildings but also about economic development and social opportunity. It is a project for the whole of the city region whether you are a football fan or not.

“We are delighted that our proposals are being so warmly welcomed since we unveiled them at the end of July, and there is still time for even more people to have their say, pledge their support or give us their feedback. All the responses gathered will inform the next stage of the project and is an important part of the planning process.”

Earlier this year Lord Michael Heseltine, former Deputy Prime Minister and long-term champion of Liverpool’s regeneration, described the Club’s plans as a ‘golden opportunity to bring lasting change to the north of the city’.

To be kept up to date with activity on the project, please visit the campaign website www.peoples-project.co.uk or follow the People’s Project social media channels.