The Northern Powerhouse is the latest focus of the Government in its efforts to decentralise and stimulate the Northern UK economy. In March this year The Northern Powerhouse: One Agenda, One Economy, One North report by Transport for the North outlined a transport strategy through which investment will drive growth. Improving East-West links shall greatly enhance connectivity which opens up endless possibilities for collaboration, business growth and reorganising the movement of people and goods by linking City Region economies.

This chimes with the aspirations of Superport Liverpool, an integrated cluster of logistics assets and expertise that will deliver faster, greener global market access for business to and from the northern UK and Ireland via an enlarged deep water container terminal.

Liverpool2, is a new deep water container terminal at the Port of Liverpool (which will double container capacity to 1.5m TEUs pa), will be followed next Spring by the new wider Panama Canal. The significance for Liverpool is how this further opens up global trade. Already Liverpool offers access onward to Ireland, North America, South America and now to the Far East; and towards the East to the Humber and onward to the Baltics, Scandinavia, Russia and beyond. 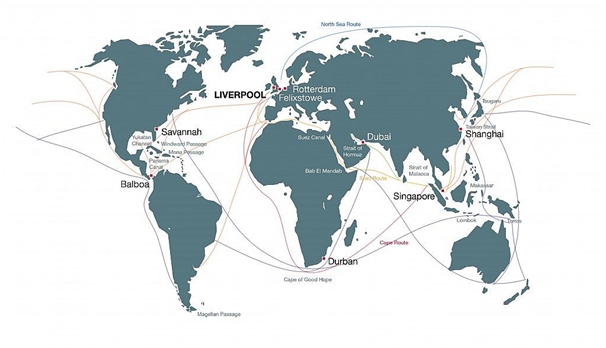 Already 45% of North American container traffic enters the UK through Liverpool and this is set to increase as global supply chains adapt to market opportunity. With the growth of online retail, transporting goods to the right place quickly will be crucial. The forecast is for e-commerce to increase by double digits year on year in the UK for the foreseeable future with Amazon seeing 39% growth recently. (Source: eCommerce Logistics Think Tank- Observations on Warehouse Requirements)

Liverpool is a gateway providing cargo owners with easy access to market. The port is within 150 miles of 35 million people and by transporting goods directly into the heart of the UK the potential for same-day delivery and late cut-off is greatly increased.

Creating new corridors will enable us to compete with the rest of the world by offering an alternative route for cargo owners to bring in goods to the north of England, Scotland and Ireland while cutting cost, time and carbon from their supply chain. There is recognition that the UK transport network is over centralised on the North-South axis and over concentrated which supports the expansion of a Northern East-West multimodal transport corridor.

Liverpool City Region benefits from excellent motorway connectivity with direct motorway access to Manchester, Leeds and Sheffield as well as two rail mainlines; the West Coast Mainline and the Liverpool to Manchester Line, both supported by a multimodal freight facilities such as 3MG (Mersey Multimodal Gateway) utilised by Tesco.

The £600m Mersey Gateway Bridge is currently under construction and will create a 6 lane crossing set to open in 2017. It will contribute to considerably relieving congestion in the surrounding area and boost the local economy.

There is also the 36 mile Manchester Ship Canal linking Liverpool with Manchester which has seen container volumes increase from 3,000 in 2009 to 30,000 in 2013 as cargo owners, primarily retailers like Regatta, Kellogg and Princes, recognise the benefits of removing road miles entirely from their supply chain. With multimodal distribution sites being developed along the canal there is further potential to see container traffic continue to rise

We already know that the UK economy is imbalanced. This is put into stark clarity when despite 60% of demand being closer to northern England and Ireland, currently 91% of deep sea containers enter via southern ports. 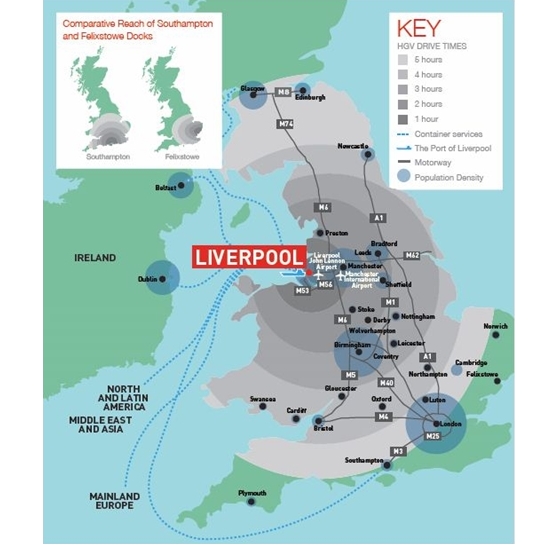 This adds to congestion and unnecessary environmental impacts from containers being transferred via road. This is unproductive for the UK economy.

When Liverpool2 opens the port can simultaneously handle two 13,500 TEU ships there will be a viable alternative to bringing in cargo to the Northern UK market. This will boost productivity through more efficient supply chains as goods get to market more quickly.

A surprising fact to support the movement of goods through the Liverpool City Region is that it has the highest density of large warehousing (over 9,000sqm) in proximity to a port. At 28%, that’s more than the Golden Triangle (20%). Demand remains high as research by Colliers International highlighted that in the 12 months between June 2014 and June 2015, prime rental values for big sheds over 100,000 sq ft in Liverpool jumped by 17% from £4.50/sq ft to £5.25/sq ft, against a North West increase of 15%.

So not only does Liverpool offer global connectivity and market proximity we also have the infrastructure and assets to service the anticipated increase in containers.

Next March Transport for the North will deliver the Northern Freight and Logistics Strategy which will focus on identifying the wider requirements for distribution developments and for highway and rail network upgrade to raise efficiency by reducing freight transport costs, linked particularly to the major ports. This is the first time a freight strategy has been developed holistically and will ensure end to end connectivity as it is being led by freight operators who currently experience the frustrations of the network on a daily basis.

Liverpool is part of the solution to rebalancing the UK

Liverpool is on the cusp of real change and Superport Liverpool presents a unique opportunity to further develop the freight and logistics hub for the north of the UK. By working collaboratively with public and private sector the benefits include: